Jody Wilson-Raybould said protests like the dispute over a pipeline development in the ancestral Wet’suwet’en territory will happen again unless the Canadian government actively works towards addressing Indigenous sovereignty.

“This situation that we’re seeing in Wet’suwet’en territory, as we’ve seen in other territories around major resource development projects, are going to continue to happen until we address the fundamental underlying reality and of the inherent right of self-government of Indigenous Peoples and ensure that Indigenous Peoples can finally make their way and see themselves in our constitutional framework,” she said in an interview with Global News Ottawa Bureau Chief Mercedes Stephenson on Sunday’s episode of The West Block.

The Vancouver member of parliament said she understood the impact the railway blockades had on Canadians, but said it was both the responsibility of the RCMP as well as political leaders to come to an amicable solution. 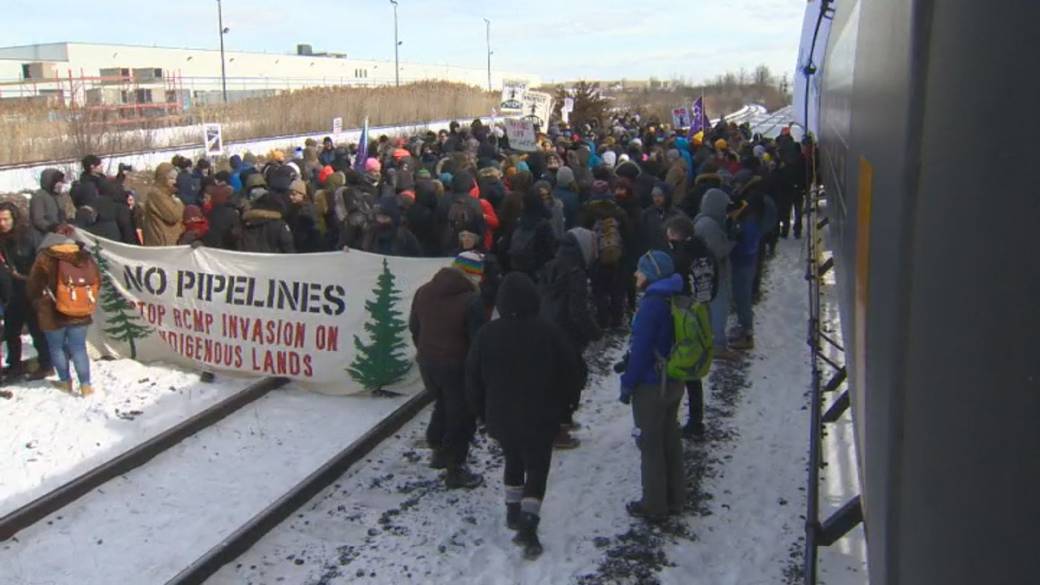 “It’s the responsibility of all of us. We got here to this place and leaders, elected leaders need to do their jobs, and that is to lead, to de-escalate the situation,” she said.

Tensions between the government and the Wet’suwet’en Nation have been escalating since Dec. 31, when British Columbia’s Supreme Court granted Coastal GasLink an expanded injunction that established an exclusion zone against protesters interfering with the construction of a $6.6-billion pipeline that is expected to carry natural gas from northeastern B.C. to a massive export plant being built near Kitimat.

If completed, the 670-kilometre pipeline would pass through the nation’s unceded territory not covered by treaty.

The project has the support of the elected band council — but not by the territory’s hereditary chiefs, which is where Wilson-Raybould said confusion comes in.


“We have the imposition of a colonial statute called the Indian Act, which has determined that First Nations groups elect leaders and that there’s nothing necessarily wrong with the elected leadership in the Wet’suwet’en territory, or that they may or may not speak for the Wet’suwet’en people. But so, too, do the hereditary chiefs,” she said.

The hereditary chiefs contend that governments do not have their consent and responded by issuing the company an eviction notice in early January, asserting the company was violating traditional their laws.

The RCMP said they had delayed enforcing the injunction for weeks to seek a peaceful resolution, but without one, they had no choice but to follow the court’s orders. On Feb. 6, the situation escalated and six people were arrested at the pipeline construction site by RCMP who were trying to clear the area. Since then, dozens more protesters have been arrested.

The anger felt by protesters in Wet’suwet’en have inspired protests and demonstrations all over Canada, resulting in massive rail blockades across the country. On Thursday, VIA Rail announced it would be shutting down a majority of its train services in Canada over the blockades.

Wilson-Raybould, who was Canada’s first Indigenous attorney general and justice minister, said under the constitution, it is up to the Indigenous Peoples who reside in Wet’suwet’en to determine what happens on their territory.

She emphasized for Indigenous Peoples to have the space to exercise their right of self-determination, self-government and the right to decide who speaks for those who reside in the Wet’suwet’en territory.

“The lack of governing institutions, as determined by Indigenous Peoples themselves, are now and will continue to impact resource development projects, will continue to impact other jurisdictions as exercised by the federal government and provincial governments until, as a country, we create the space necessarily… for Indigenous Nations to rebuild within a stronger Canada, said Wilson-Raybould. 5:05What you need to know about the Wet’suwet’en protests.

What you need to know about the Wet’suwet’en protests.

“When we do that, when Indigenous Peoples finally see themselves and can exercise their inherent rights of self-government, the country will be the better for it.”

Wilson-Raybould, a former Liberal, sits as an independent MP after winning 30.7 per cent of the vote in last year’s federal election.

Following a campaign of pressure from members of the Trudeau administration to resolve criminal charges against SNC-Lavalin,  she was demoted from her position as attorney general and justice minister and dismissed from the Liberal caucus last year. In August, a report by the federal ethics commissioner found Prime Minister Justin Trudeau violated Canada’s Conflict of Interest Act.

COMMENTARY: Why Donald Trump’s coronavirus border plan is much ado about nothing – National – 9jabase