Storm Dennis has been battering Britain all weekend, with the U.K.’s national weather service, the Meteorological Office, issuing a red warning — the highest level of warning — for rain in South Wales on Sunday.

“Red warnings are issued when it is highly likely the weather will cause a high level of impact, and this warning is the first red warning for rain the Met Office has issued since December 2015,” said their website.

📣 The severe flood warnings have been downgraded.
💧 🚘 However conditions remain incredibly dangerous so please be careful., particulary whilst its dark over night. Do not walk or drive through flood water – two feet of water can float a car.

“The severe flood warnings have been downgraded,” the agency said.

“However conditions remain incredibly dangerous so please be careful, particularly whilst its dark over night. Do not walk or drive through flood water – two feet of water can float a car.”

Photographs by news agencies show flooded streets, river debris and people being evacuated from flooded areas by small watercraft in some areas of South Wales.


The U.K.’s Met Office has also warned that Monday will be a “windy” day, particularly in the western region of the country.

Monday will be another windy day across the UK due to #StormDennis, especially in the west where a ⚠️ Yellow Wind Warning is in force ⚠️

It will be a windy, bright and rather chilly start to #Monday morning as #StormDennis slowly clears to the east. There will be scattered blustery showers in the west too

People living in South Wales had to be rescued by emergency officials after the region saw a record number of flood warnings Sunday. South Wales Police had to contend with landslides and floods, including some that trapped residents in their homes, BBC News reported.

“Hundreds of people have been rescued from their homes,” South Wales police said in a Facebook post. 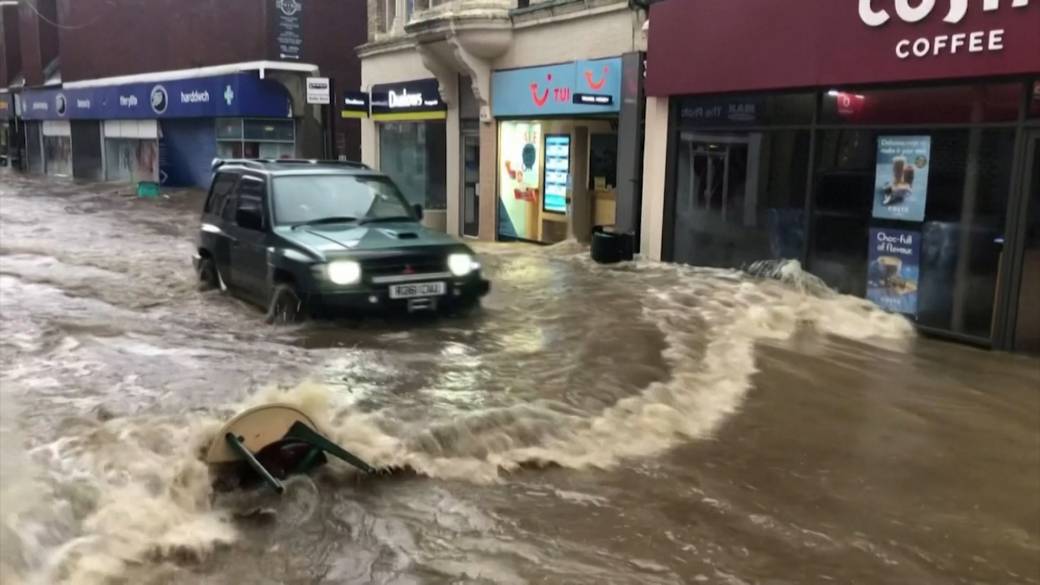 — With files by The Associated Press, Reuters