Roman Reigns has dropped out of WrestleMania 36 because of coronavirus concerns.

He will not be participating in his scheduled Universal championship match with Bill Goldberg at WrestleMania 36 because he has leukemia and is immunocompromised, which puts him at greater risk if he contracts COVID-19. 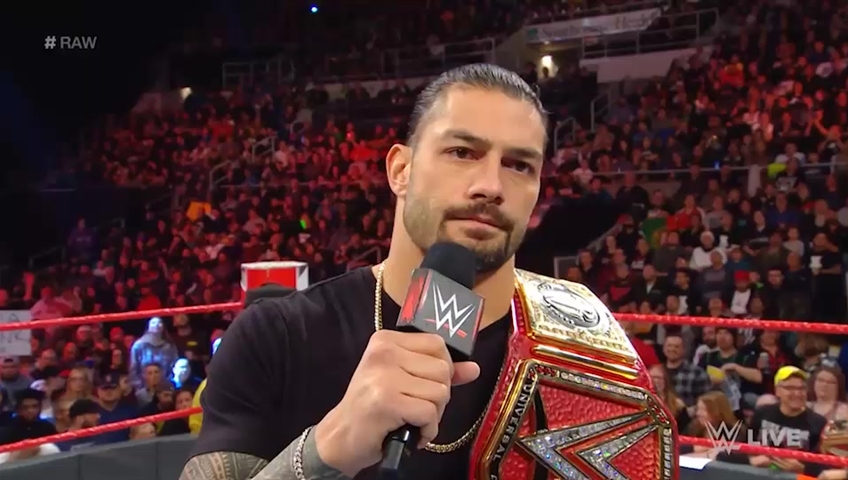 The news that the 34-year-old WWE superstar pulled out of WrestleMania 36 was first reported by Pro Wrestling Sheet and the outlet revealed that Reigns expressed to WWE that he didn’t feel comfortable doing any more of the Performance Center shows.


READ MORE:
WrestleMania 36 is still happening amid coronavirus pandemic — but without any fans


The outlet also reports that the WWE honoured his request and he will now be replaced by someone else in the match against Goldberg, though it’s unclear who at this time.

Before Reigns dropped out, he tweeted: “Don’t care where my match falls. Just happy to be healthy and fit enough to participate. Grateful to share the ring with a legend and icon on our industry’s biggest night(s). As should everyone else, in a time like this. Be safe, healthy and grateful.”

Don’t care where my match falls. Just happy to be healthy and fit enough to participate. Grateful to share the ring with a legend and icon on our industry’s biggest night(s). As should everyone else, in a time like this. Be safe, healthy and grateful. https://t.co/lRIauineEc

WWE previously announced that WrestleMania 36 will still go ahead but there will be no fans in attendance due to the COVID-19 pandemic.

WrestleMania 36 was originally supposed to take place in Raymond James Stadium in Tampa, Fla., but now the WWE is moving the event to its training centre in Orlando.

The WWE released a statement on Monday saying the event will stream live on April 5 at 7 p.m.

“In coordination with local partners and government officials, WrestleMania and all related events in Tampa Bay will not take place. However, WrestleMania will still stream live on Sunday, April 5 at 7 p.m. ET on WWE Network and be available on pay-per-view. Only essential personnel will be on the closed set at WWE’s training facility in Orlando, Florida to produce WrestleMania,” the statement read.


In February 2019, Reigns said his leukemia was in remission and announced that he’d be returning to the ring.

Reigns, whose real name is Leati Joseph Anoai, was only 22 when he was first diagnosed with leukemia.

The former WWE Universal Champion relinquished the belt in October 2018 after disclosing that the disease had returned and that he was taking a hiatus to fight it.

The former football player thanked fans for their support and admitted that he struggled with his decision to announce his cancer diagnosis.

“I’m not going to lie — before my announcement in October I was terrified. I was scared. I was insecure. And I didn’t really know if I wanted to share that secret with the world,” he told the cheering crowd at a WWE Raw event in Atlanta in February 2019.

Questions about COVID-19? Here are some things you need to know:

Health officials caution against all international travel. Returning travellers are legally obligated to self-isolate for 14 days, beginning March 26, in case they develop symptoms and to prevent spreading the virus to others. Some provinces and territories have also implemented additional recommendations or enforcement measures to ensure those returning to the area self-isolate.

Symptoms can include fever, cough and difficulty breathing — very similar to a cold or flu. Some people can develop a more severe illness. People most at risk of this include older adults and people with severe chronic medical conditions like heart, lung or kidney disease. If you develop symptoms, contact public health authorities.

To prevent the virus from spreading, experts recommend frequent handwashing and coughing into your sleeve. They also recommend minimizing contact with others, staying home as much as possible and maintaining a distance of two metres from other people if you go out.

Usually untouchable, here’s how the Royal Family is impacted by coronavirus – National