He was at a crossroads, his life stretching out before him, his troubles largely behind him. He had enrolled at South Georgia Technical College, preparing to become an electrician, just like his uncles. But first, he decided, he would take a break. College could wait until the fall.

To help keep his head clear, he ran, just about every day. Off he’d go, out of the doors of his mother’s house, down the long street toward Fancy Bluff Road. Then would come the right turn onto the two-lane road lined by oak trees draped with Spanish moss.

About a mile and a half into his usual route, Ahmaud Arbery would cross the four lanes of Jekyll Island Causeway into the subdivision of Satilla Shores.


Three months ago, at the age of 25, he ran through Satilla Shores for the final time.

On Feb. 23, Arbery was shot to death by a father and son who told police they grabbed guns and pursued him in a pickup truck because they believed he was responsible for break-ins in their neighborhood — a black man, killed by two white men.

A makeshift memorial of flowers now rests on the lawn of a house near where he died, along with a plaque reading, “It’s hard to forget someone who gave us so much to remember.”

Before Arbery’s name joined a litany of hashtags bearing young black men’s names, he was a skinny kid whose dreams of an NFL career didn’t pan out. Those who knew him speak of a seemingly bottomless reservoir of kindness he used to encourage others, of an easy smile and infectious laughter that could lighten just about any situation. 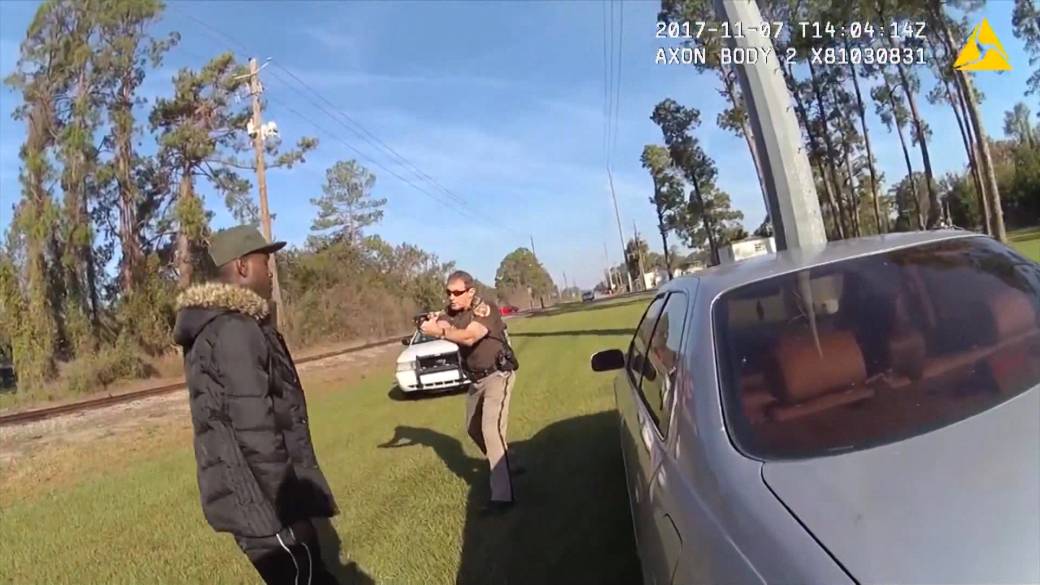 They also acknowledge the legal troubles that cropped up after high school — five years of probation for carrying a gun onto the high school campus in 2013, a year after graduation, and shoplifting from a Walmart store in 2017, a charge that extended that probation up until the time of his death.

In his final months on Earth, Arbery appeared to be someone who felt on the verge of personal and professional breakthroughs, especially because his probation could have ended this year, many of those close to him told The Associated Press.

His mother, Wanda Cooper-Jones, accepted that he was a young adult living at home, like so many of his contemporaries, taking a breather to chart how he’d one day support himself.

She had one rule: “If you have the energy to run the roads, you need to be on the job.”


So he worked at his father’s car wash and landscaping business, and previously had held a job at McDonald’s.

Born May 8, 1994, Ahmaud Marquez Arbery was the youngest of three children, answering to the affectionate nicknames “Maud” and “Quez.”

As a teenager, he stuck to the family home so markedly that his family worried he never wanted to go out with friends. “And I was like, he’ll get to the stage eventually,” Cooper-Jones said. ’He was a mama’s boy at first.”

As his mother predicted, that reserve was left behind when Arbery entered Brunswick High School’s Class of 2012. 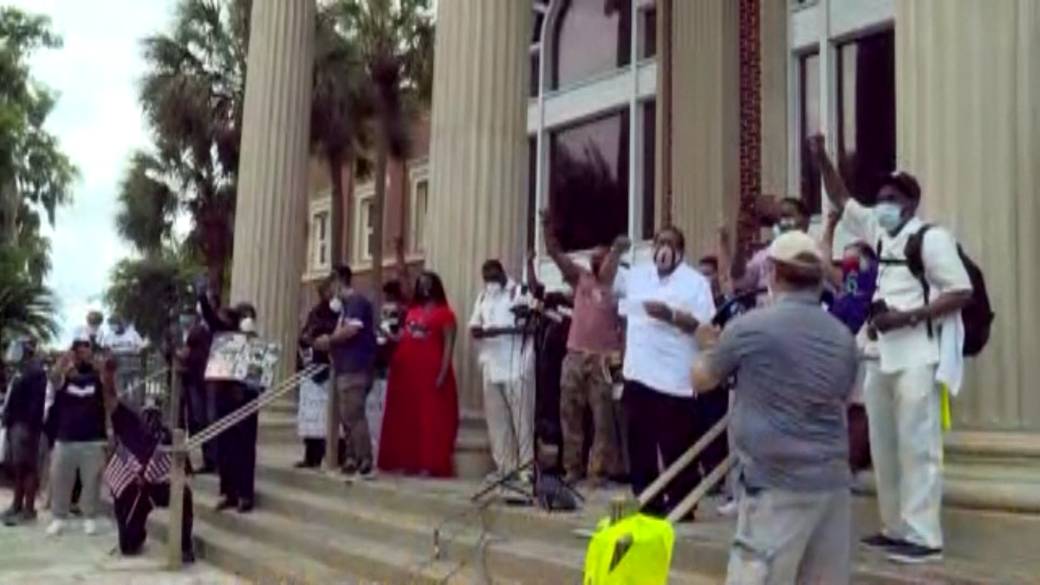 He took cues from his brother, Marcus Jr., and tried out for the Brunswick Pirates football team. His slender build certainly didn’t make him a shoo-in for linebacker on the junior varsity squad, said Jason Vaughn, his former coach and a U.S. history teacher at the school.

“As soon as practice started and Ahmaud started to really go, oh man, his speed was amazing,” Vaughn recalled with a laugh. “He was undersized, but his heart was huge.”

Off the field, Ahmaud had a talent for raising the spirits of the people around him — and a penchant for imitating his coach, Vaughn said.

“If I was standing in the hallway, kind of looking mean or having a bad day — maybe my lesson plan didn’t go right — Maud could kind of sense that about me,” Vaughn said. “He’d come stand beside me and be like, ‘I’m Coach Vaughn today. Y’all keep going to class. Hurry up, hurry up! Don’t be tardy! Don’t be late!’ That’s what I loved about him. He was always trying to make people smile.”


“Some students it’s hard to get mad at,” he said, “because you love them so much.”

At the end of his final football season, no college recruiters tried to woo No. 21. But Arbery’s high school football career still finished on a high note, his mother remembers.

In his final game, he intercepted a pass and ran the ball back to score a touchdown. A referee threw a flag on the play, but his mother insisted that his accomplishment still mattered: “I said, ‘Guess what, son? You did it!’ And he was very, very excited about it. That was a very good moment for us.”

Former teammate Demetrius Frazier grew up just down the street from the Arberys, and his friendship with Ahmaud dated back to their days in a local pee-wee football program. 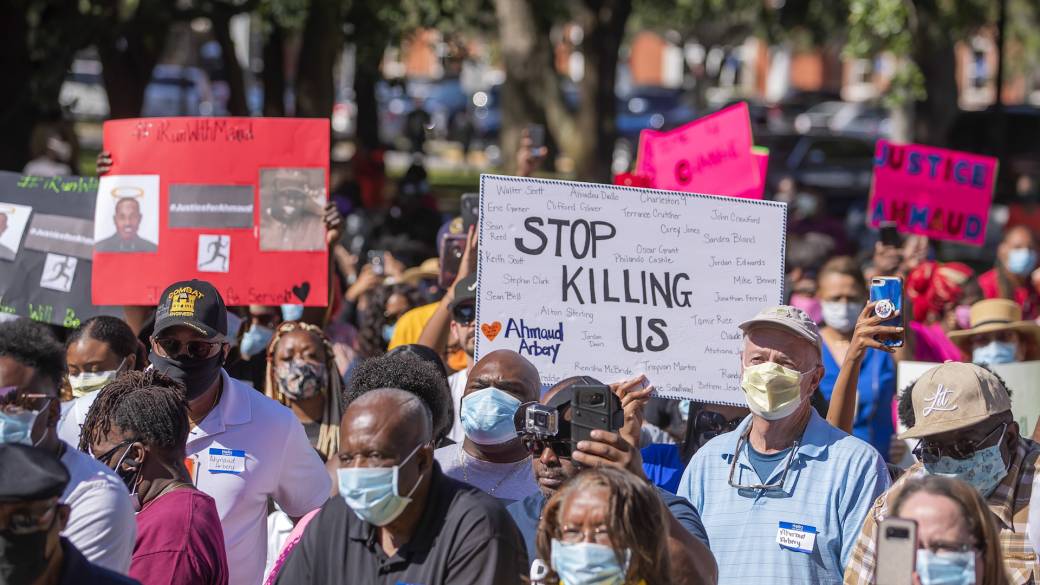 Those were the times his friend seemed happiest, Frazier said, before his legal troubles bogged him down.

Frazier went on to play wide receiver for Middle Tennessee State University’s football team and now holds down an office job and is raising a son in nearby Darien, Georgia.

Arbery’s own football aspirations had been dashed, but he still wanted so much for himself, Frazier said.


“Ahmaud was just ready to put himself in a position to be where he wanted to be in life,” he said. “That’s what they took from him.”

Less than two weeks before Arbery was killed, 34-year-old Travis McMichael had called 911 to report a possible trespasser inside a house under construction in the subdivision, describing him as “a black male, red shirt and white shorts” and saying he feared the person was armed.

The Arbery family’s attorneys have confirmed that Ahmaud was captured on security cameras entering that home on the day he was killed. The property owner said nothing appeared to have been stolen, however, and surveillance footage also shows other people coming in and out of the construction site on other days, some apparently to access a water source on the property.

Travis McMichael and his 64-year-old father Gregory McMichael — a former police officer and retired investigator for the Glynn County district attorney — were charged with murder and aggravated assault on May 7, a day before Arbery would have turned 26. 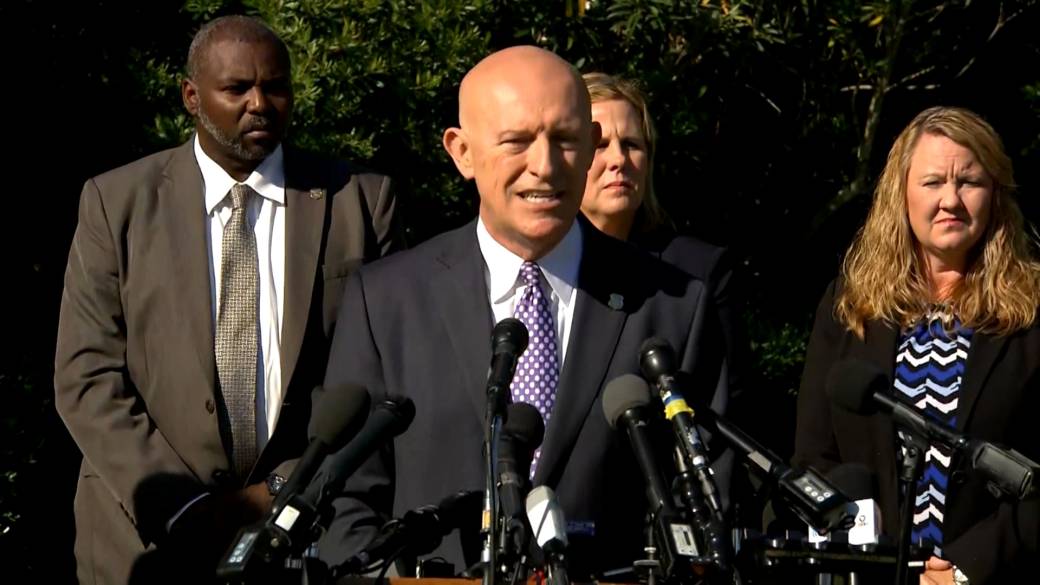 Their arrests were sought by state law enforcement authorities after cellphone video of the shooting taken by another man at the scene was released to a local radio station. Gregory McMichael told police that Arbery attacked his son and then was shot in a struggle over Travis’ shotgun.

For Arbery’s family, the pain of his loss is magnified by his final moments being captured on video.

“I didn’t want to watch it. I didn’t want my children to watch anything like that, to see their brother get killed,” said Ahmaud’s father, Marcus Arbery Sr., who noted that at least one of Ahmaud’s siblings viewed the footage. “My daughter, she called me and broke down crying. They just turned my family upside down.”


READ MORE:
Ahmaud Arbery murder case gets 3rd outside prosecutor in less than a month


Cooper-Jones has said she believes her son was simply out for a jog when he encountered the men who had profiled him as a burglar. Their rush to judgment speaks to a larger problem of bias against young black men and boys, she said.

“I think that when he went into the property, he probably was looking to see how they were going to run the wire … or how he would do the job if it was one of his assignments,” she said, referring to his plan to become an electrician.

Lee Merritt, one of the Arbery family’s civil rights attorneys, said the circumstances of Ahmaud’s life touch on something deeper about American society.

“Our ravenous criminal justice system tends to take young black men in their teenage years, introduces them to the system and never lets them out again,” he said. But when Ahmaud died, “he was at a point of transition.” 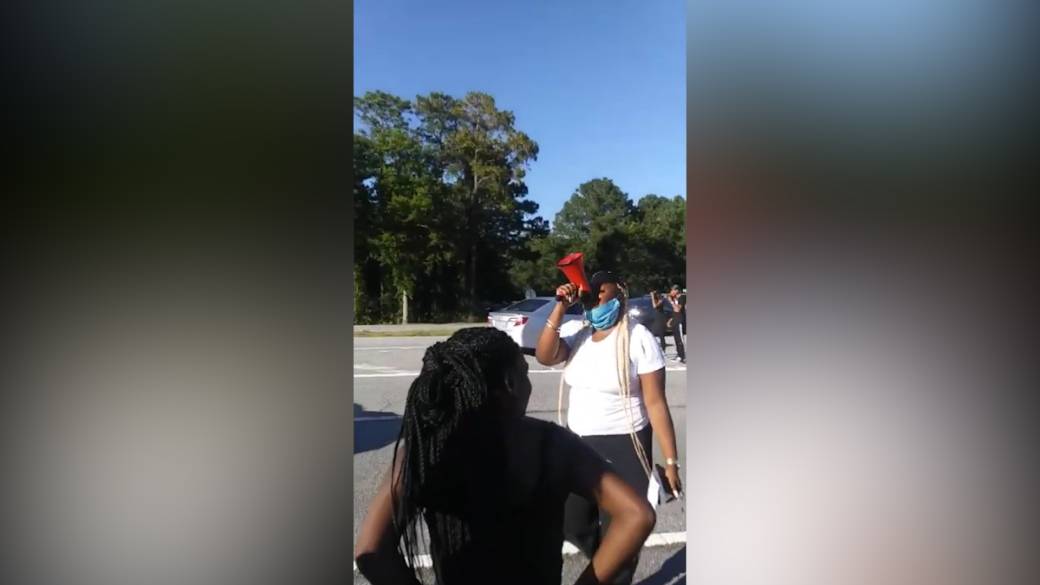 1:38‘No Justice, No Peace’: Ahmaud Arbery protest held in Georgia

‘No Justice, No Peace’: Ahmaud Arbery protest held in Georgia

His death will not be in vain, his sister told a crowd of supporters during a rally calling for justice that was held at the historic Glynn County courthouse in Brunswick earlier this month. Many attendees had driven hours from Atlanta to be there.

“I like to believe that our lives are already planned out before we even take our first steps,” Jasmine Arbery said. “I hate to feel like he was sacrificed, but that’s how I feel.”

Gazing at the tributes later that night, Cooper-Jones said she does not doubt that she raised her son right. As a mom, she had been a stickler; she knows that.


This month, she celebrated her first Mother’s Day without her youngest child. Thinking about a greeting card he’d given her for the occasion two years ago made her smile.

“We don’t see eye to eye, but I love you,” she recalled Ahmaud writing. “That tells me, I had just got on his butt about something that he did.”

Ultimately, she said, nothing her son did in his short life justifies the way he died.

“I will get answers — that was my promise,” she said. “That’s the last thing that I told him, on the day of his funeral, that Mama will get to the bottom of it.”