The Lagos State Emergency Management Agency (LASEMA) said 20 families have been displaced at Orile-Agege area of the metropolis, as a result of flooding that occurred on Thursday.

According to a statement by Nosa Okunbor, the spokesperson of the agency, the flood destroyed not fewer than three compounds in the area.

A mother and her daughter residing at 12, Hassan Adejobi Street, Papa Ashafa, Orile-Agege, were among those displaced as a result of flooding which occurred at about 6 a.m.

“Upon arrival of the agency’s officials at the incident scene, it was observed that a fence fell on a bungalow boy’s quarters with six rooms located in the same compound with a 10-room bungalow that was submerged by water as result of flood at about 6 a.m. on Thursday 18th June, 2020.

“It was further revealed to the agency’s officials at the incident scene that two victims (an adult female and her female child) living in the affected building sustained minor injuries and were taken to a hospital before arrival of the agency’s LRT.

”Three other compounds were also affected by the flood. Presently about 20 families have been displaced by the flood,” Mr Okunbor said.

The LRT conducted a post-disaster assessment of the affected areas and also sensitised the residents on general safety measures, the spokesperson said.

PREMIUM TIMES earlier reported how several parts of Lagos metropolis were flooded, including major highways in the state.

Partially collapsed building as a result of flood 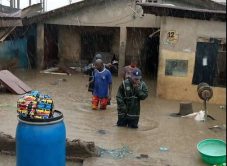