The 99 deaths reported between last Sunday and Saturday are a 34 per cent increase on the 65 recorded the week before.

The rate of recovery from the killer disease also dropped significantly last week compared with the previous week.

PREMIUM TIMES’ analysis of data from the Nigeria Centre for Disease Control (NCDC) shows that 1077 patients recovered and were discharged last week, representing a 13 per cent reduction from the 1239 recorded in the previous week.

The pandemic continues to spread in Nigeria with thousands of new cases recorded last week.

For five weeks consecutively, the number of new cases has soared.

The NCDC also conducted 20,588 tests last week, the highest in the past four weeks.

The NCDC had warned that increasing the number of tests could result in an increase in new infections recorded.

Following the trend of increasing deaths and new infection, some state governments have rescinded their decision to reopen places of worship.

For instance, Lagos and Ogun state governments, last week, announced an indefinite suspension of reopening of churches and mosques.

Also, the federal government that had planned to allow resumption of domestic flights on June 21, said that date is no longer feasible. 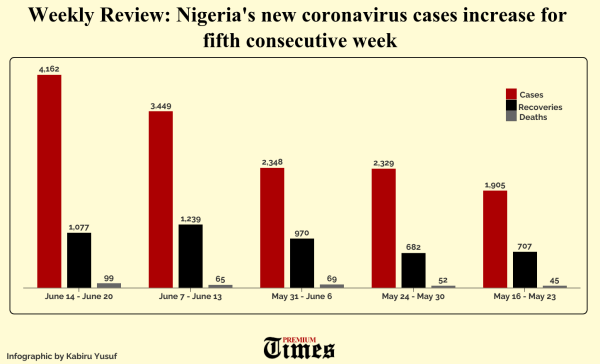 The Director-General of the Nigerian Civil Aviation Authority (NCAA), Musa Nuhu, added that the aviation industry is yet to meet up with conditions that can enable compliance with the safety protocols. As of the time of filing this report, 506 persons have lost their lives to the disease.

Only Cross River State is yet to record a single case of the infection, although a lawmaker in the state was reported to have died after showing symptoms of the infection at the University of Calabar Teaching Hospital (UCTH) isolation centre around 12:30 pm on Thursday.

Nigeria has so far tested 111,052 samples since the beginning of the outbreak in Nigeria in February.

A total of 587 new cases were reported on Wednesday which brought the number of confirmed cases to 17735. On Friday, 667 new cases were reported, bringing the tally of confirmed cases to 19147.

Ottawa must reset foreign policy with all eyes on China after ‘disastrous’ week: experts - National - 9jabase