The University of Maiduguri ranked top of Nigerian universities with the highest admission figure for 2019, data from the JAMB shows.

The school admitted 12,523 students for the year, an increase from the 11,665 students it matriculated the previous academic year.

The university is located on the outskirts of Maiduguri en route Bama in Borno State, the hotbed of the decade-long Boko Haram war.

The school has not been spared from attacks by Boko Haram, an extremist sect that professes to hate education. The group has killed thousands and displaced millons in northern Nigeria.

In 2017, a twin bomb in the university killed four people, including a professor, Aliyu Mani, and one of the attackers.

More explosions would be recorded later in the year with no casualties save the attackers.

In the years that followed, there were reports of foiled attempts to attack the school by the insurgents.

Asked about the school’s rising admission figure in the face of the war, the school’s director of information, Ahmed Muhammed, told PREMIUM TIMES that admission only dipped at the peak of insurgency in the state, but has increased in recent years due to “the security measures put in place by the management.”

He said asides the federal and state security agencies, the school has employed local hunters to ensure security of the school.

There have also been reports of authorities in Borno digging a 27 km (17 mile) trench around the University of Maiduguri to prevent attacks by Boko Haram militants.

“Before you enter (the school), you are being checked thoroughly. If you don’t have a means of identification, you cannot be allowed into the school,” Mr Muhammad said.

“We have other security measures which we don’t need to mention so that if anyone tries us…so that they don’t even try to come.”

For every six students admitted by Nigerian tertiary institutions in 2019, at least one of them was admitted by 10 universities, a review of data from JAMB shows.

These universities account for about one-sixth of all admissions in 2019.

UNIMAID aside, the schools that admitted the highest number of students include Universities of Calabar, Benin, Ilorin, Lagos and Port Harcourt. 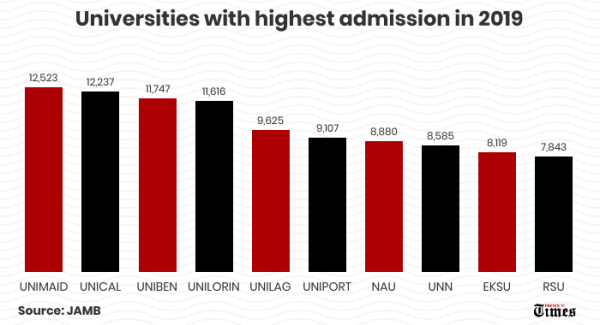 The admission data released by JAMB shows that the nation’s universities admitted a total of 444,947 students. Judging by this, a quarter of these students were admitted by the aforementioned universities. 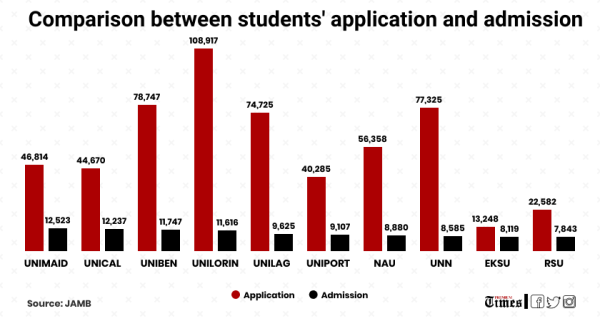 Comparatively, the admission figures of UNIMAID, UNICAL and NAU are only about a quarter of their applicants.

For UNIBEN and UNIPORT, admissions were offered to one-seventh of their respective applicants. In UNILORIN, UNILAG and UNN, it is respectively one in eleven, one in ten and one in nine applicants that made the admission cut respectively. 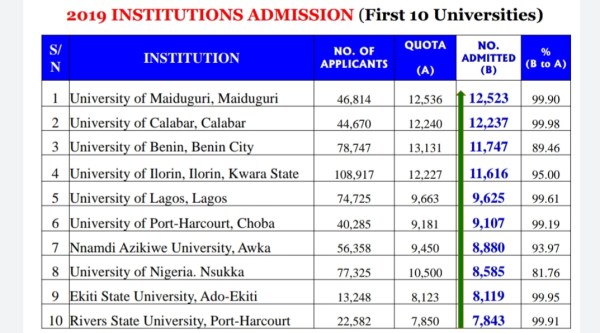 The duo of EKSU and RSU, in that order, offered half and a third of their applicants admission.

PREMIUM TIMES reported how two-thirds of about two million candidates who applied for tertiary education in the country in 2019 were not admitted as revealed by the JAMB.

Data from the board while about two million students applied for the Unified Tertiary and Matriculation Examinations and Direct Entry, the country’s institutions had a target of 600,000.

This is in spite of roughly 1.2 million making JAMB’s cutoff of 140 and above and having five O Level credits, including mathematics and English.

A third of the 96,423 students who gained entry into the nation’s polytechnics and monotechnics did so into: 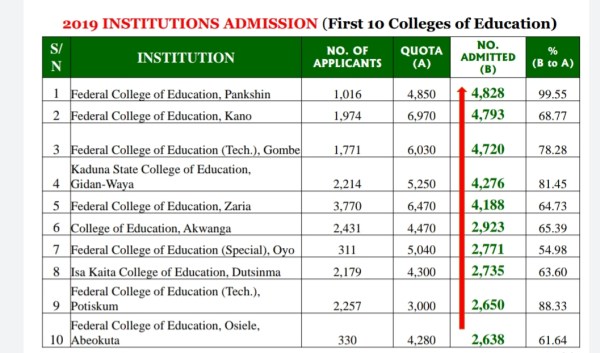 More than half of the 69,810 students admitted by colleges of education nationwide were admitted into: 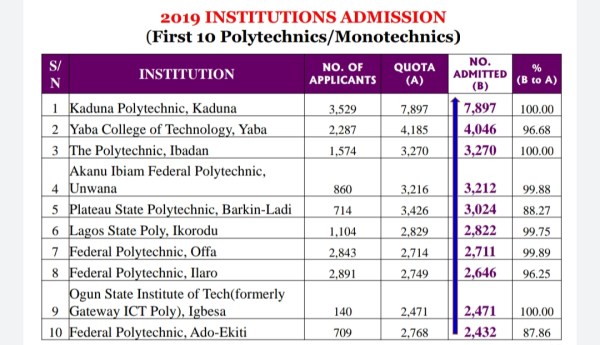 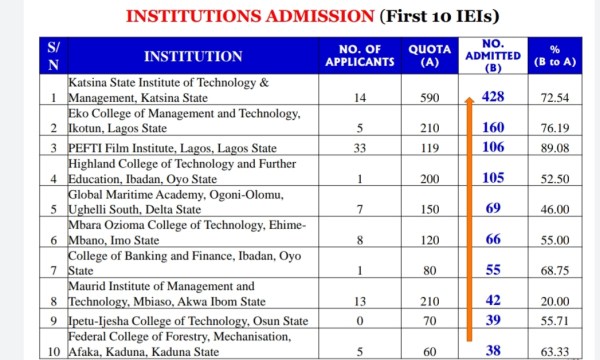 How Nigeria has fared in rice production since 1999 – 9jabase

How Nigeria has fared in rice production since 1999 – 9jabase

COVID-19 may be transmitted through air – NCDC – 9jabase