‘The Danfo Driver in All of Us’, a collection of commentaries and opinion pieces by Nigerian writer, Niran Adedokun, published in national newspapers and magazines in the last eight years, is set for release.

Narrative Landscape Press, a Lagos-based independent publishing company, made the announcement in a statement sent to PREMIUM TIMES on Sunday.

‘The Danfo Driver in all of us’, is the second book by Mr Adedokun who is also a lawyer, public relations practitioner, and columnist with The PUNCH and The Cable newspaper.

Commenting on the reaction to his articles, Mr Adedokun said, “Even though I practiced as a journalist for over a decade… I never imagined that I would write commentaries about anything and gain attention for doing it.”

His publishers say ‘The Danfo Driver in All of Us’ attempts to “deconstruct Nigeria and the people that inhabit it, the proclivities that set us back, the opportunities that go to waste, the potential that we never realise and the future for which we fail to prepare.”

Dapo Olorunyomi, publisher of Premium Times, described the book as “keen insight in depicting the Nigerian condition. Only a few books, using the genre of commentary journalism in recent times have come this close to this convincing testimony.” 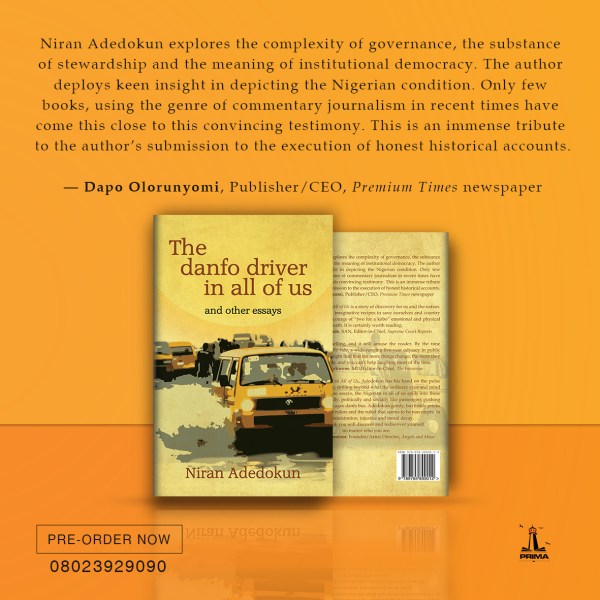 Layi Babatunde, a Senior Advocate of Nigeria and editor-in-chief of Supreme Court Reports, said the new book “offers simple but imaginative recipes to save ourselves and country from the looming scourge of “two for a kobo” emotional and physical death. It is certainly worth reading.”

For Azu Ishiekwene, editor-in-chief, The Interview, “the prose is compelling, and it will amuse the reader. By the time you get off this danfo ride … you can’t help laughing most of the time.”

Victor Ehikhamenor, founder/artist director, Angel and Muse, said the new book will make “you discover and rediscover yourself no matter who you are.”

Mr Adedokun’s first book, Ladies Calling the Shots, a profile of 17 top female film and television directors in Nigeria, was published in 2017.

Since 2012, when his first article was published in The PUNCH, he has continued to write about social, political, and religious issues with humour, passion and insight.