Only two days after it was announced by his daughter Vada via Twitter, Kid Cudi released his latest single, The Adventures of Moon Man & Slim Shady, on Friday, July 10.

As suggested in the title, the four-minute, 25-second track features fellow American rapper Slim Shady, who is best known as Eminem. It marks the very first time the two have collaborated together.

Not only does The Adventures of Moon Man & Slim Shady serve as Kid Cudi’s first solo release since April’s one-off single Leader of the Delinquents, but it’s the first track from his upcoming 2021 album Entergalactic.

The drum- and bass-heavy song is backed by ambient synth sounds and was released alongside an animated lyric video, which replicates that sound with its colourful display of imagery.

Aside from their joint outro, The Adventures of Moon Man & Slim Shady consists of only two verses — one for each rapper.

While Kid Cudi, 36, sings of his comeback to a sound more true to his earlier works, Eminem, 47, touches on a number of taboo subjects, including U.S. President Donald Trump and the ongoing COVID-19 pandemic.

Read more:
Blues singer Lady A responds to name lawsuit — ‘I am not going to be erased’

After calling the Trump administration “a bunch of half-wits,” Eminem raps about the lack of safety regulations in place to help mitigate the spread of the novel coronavirus in the U.S.

“Half of us walking around like a zombie apocalypse / Other half are just p⁠—ed off and / Don’t wanna wear a mask and they’re just scoffing / And that’s how you end up catching the s⁠—t off ’em / I just used the same basket as you shopping / Now I’m in a f⁠—kin’ casket from you coughin’,” he raps in the verse.

Eminem also calls out avid cannabis advocates Tunechi, a.k.a. Lil Wayne, and Snoop Dogg after singing about his sobriety.

On top of that, the Lose Yourself hit-maker raps about systemic racism and police brutality in the U.S. while paying homage to the late George Floyd and Ahmaud Arbery.

Along with the death of other Black Americans, the separate killings of Floyd and Arbery earlier this year have helped renew calls to fight systemic racism and put an end to police brutality across the world.

“Prayers to George Floyd and Ahmaud Arbery / How the f⁠—k is it that so many cops are dirty? / Stop, man, please, officer, I’m sorry / But I can’t breathe when I got you on top of me / Your god damn knee’s on my carotid artery,” Eminem raps. 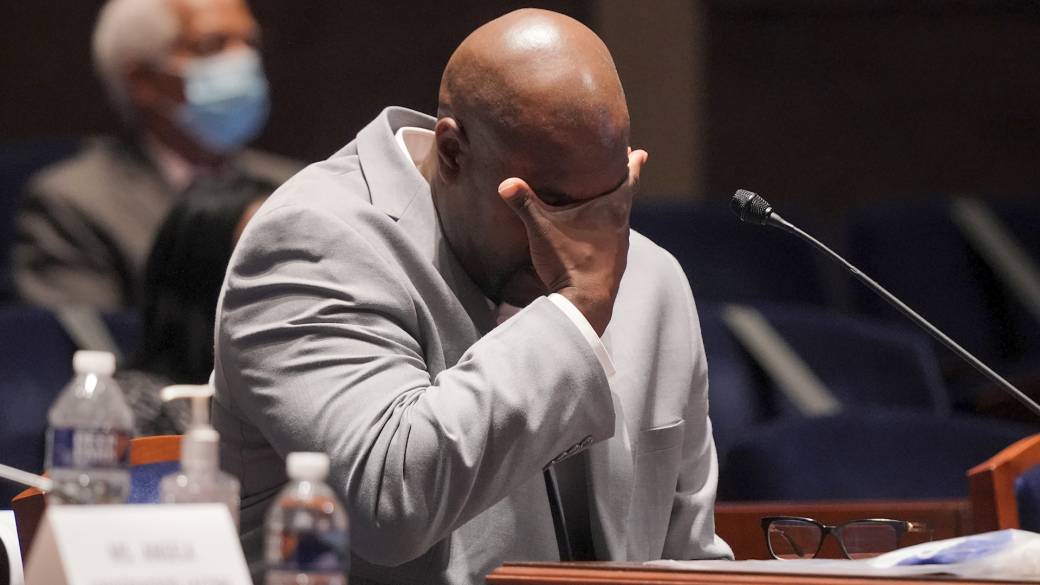 2:45George Floyd’s brother breaks down about Minneapolis video: ‘You don’t even do that to an animal’

George Floyd’s brother breaks down about Minneapolis video: ‘You don’t even do that to an animal’

Though it wasn’t explicitly explained why Eminem called out the NFL star, Brees, 41, faced major backlash on June 3 after saying he “will never agree with anybody disrespecting the flag of the United States of America or our country.”

The controversial statement came in response to Brees being asked how the NFL should respond if players once again take a knee in protest of police brutality during the national anthem following the death of Floyd.

The Adventures of Moon Man & Slim Shady is now available through all major streaming platforms.

The song’s official lyric video can be seen above.