Demonstrators — who were defying a ban on mass gatherings amid a spike in virus infections — threw bottles, rocks and flares at the police guarding the domed parliament building in central Belgrade and removed the metal fences in front of it. Smoke rose above the entry stairway.

Police first used their shields to push back the protesters and prevent them from entering the building. But after repeated attacks, they fired tear gas to disperse the crowd, and then ended up in running battles with demonstrators.

Several people were arrested, and many reporters were injured, mainly in attacks by the demonstrators.

Some opposition leaders have said the violence was the work of far-right nationalist demonstrators controlled by the government — with an aim to discredit the peaceful protests that began in response to President Aleksandar Vucic’s efforts to reimpose lockdown restrictions against the virus. But, they have mushroomed into an expression of wider frustration with his hard-line rule.

Vucic has denied that “hooligans,” who were seen beating up the peaceful protesters earlier this week, are under his control, claiming they were brought in by the opposition. On Friday evening, he told pro-government Pink TV that all those who were attacking the “brave” policemen will be arrested. 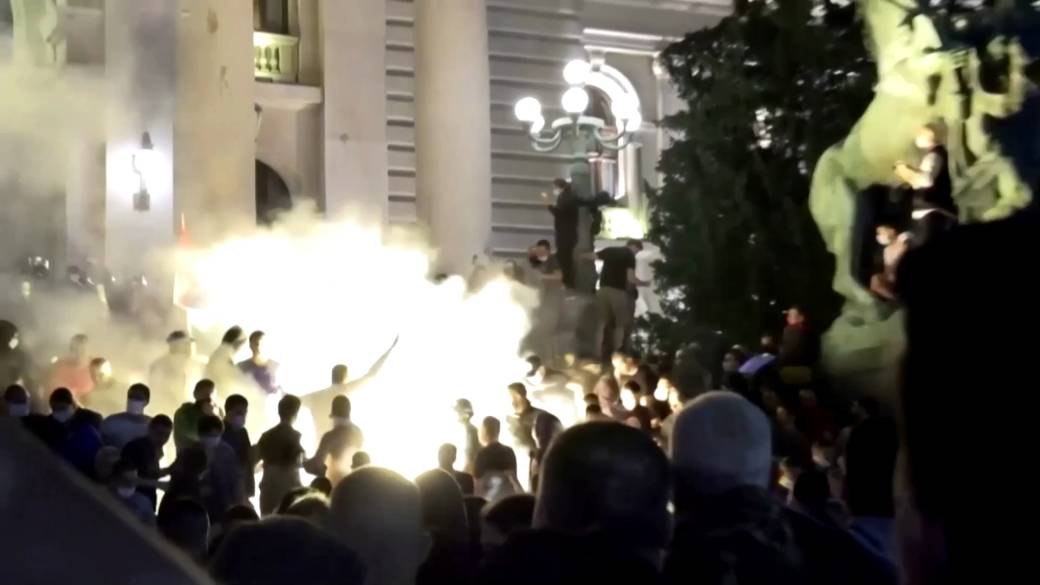 “The masks have fallen,” Vucic said, describing the protesters as a mix of tycoons and bullies “who want to take over power.”

Earlier in the day, Vucic said he wasn’t worried about losing political power amid the protests, considered the most intense since the overthrow of former Serbian strongman Slobodan Milosevic in 2000. He instead expressed fear about the spread of the virus by the demonstrators.

“It is so irresponsible to call upon people to gather and demonstrate when we are faced with the most horrific numbers of infections from the coronavirus,” Vucic told reporters during his state visit to France.

“I beg people, please let’s keep our health safe. Nobody is going to take power by force. Power is taken at the elections. You can protest as much as you want when the epidemic is over,” he said.

The Serbian prime minister announced the highest daily number of deaths, 18, on Friday since the start of the pandemic in the Balkan country. She said 386 new confirmed were recorded cases in the past 24 hours. That brings the total to over 17,300 confirmed cases and 352 deaths since March.

Friday’s unrest came after a peaceful protest on Thursday — though there was also violence earlier this week.

The protests started on Tuesday when Vucic announced that Belgrade would be placed under a new three-day lockdown following a second wave of confirmed coronavirus infections. They have continued even though Vucic suspended his plans to enforce the lockdown. Instead his government has banned gatherings of more than 10 people in the capital.

After initially handling the pandemic relatively well, Vucic and his government have been accused of allowing the crisis to spin out of control in order to hold a June 21 election that tightened his grip on power.

During his nearly three years in office, Vucic has consolidated a tremendous amount of power in the presidency, a role that previously was only ceremonial.

Read more:
Live updates on the coronavirus pandemic in Canada

Opponents blame the president for contributing to the large spike in deaths and new cases after he entirely lifted previous very tight lockdown measures. Mass gatherings at soccer and tennis matches and at nightclubs were allowed despite warnings by experts that this could lead to a spike in infections.

Serbian officials denounced the protests as an attempt to overthrow the government and weaken Vucic’s position in the European Union-mediated negotiations on Kosovo, a former province whose 2008 declaration of independence Belgrade doesn’t recognize.