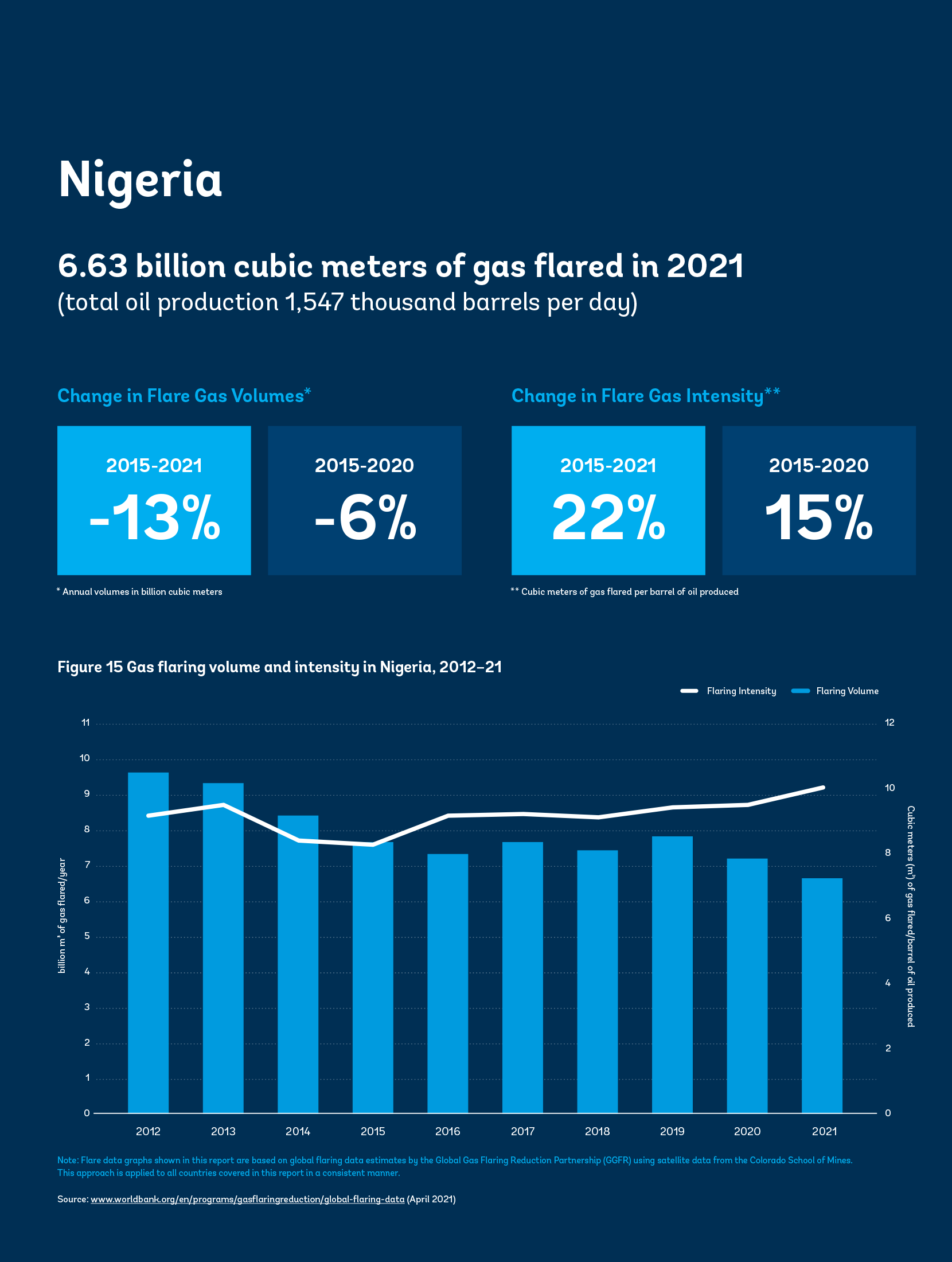 Nigeria’s oil production fell by nearly 40 percent from 2012 to 2021. During this period, the flaring intensity barely changed. The volume of gas flared declined broadly in proportion to oil production, falling 25 percent, from 9.6 bcm to 6.6 bcm. There were 166 individual flare sites in the last flare count, conducted in 2019.

In June 2016, Nigeria endorsed the World Bank’s Zero Routine Flaring by 2030 initiative (World Bank, n.d.). It also participates in the Global Methane Initiative (n.d.) and the Climate and Clean Air Coalition (n.d.0). Nigeria submitted its first NDC to the UNFCCC in 2015. It included gas flaring reduction as a mitigation measure, it submitted an updated NDC in July 2021. The update does not include unconditional contributions pertaining to the energy sector. Among the sector’s conditional contributions are zero routine flaring by 2030 and a 60 percent reduction in fugitive methane emissions by 2031.

Early oil and gas legislation—such as the Petroleum Act, 1969, and the Associated Gas Re-injection Act, 1979—included the prevention of atmospheric pollution and the conservation of resources. The Associated Gas Re-injection Act, 1979,prohibited gas flaring without the written permission of the minister in charge of oil and gas after January 1, 1984. However, measures to reduce flaring gained only limited traction, and the deadlines for ending routine flaring were repeatedly postponed.

In December 2017, the Ministry of Petroleum Resources published the National Gas Policy in the official gazette. The policy commits the government to taking measures to ensure the development of flare capture and utilization projects and to work collaboratively with the industry, development partners, providers of flare-capture technologies, and third-party investors. The policy also points out that the gas flaring penalty (at the time equivalent to US$0.03/thousand standard cubic feet [mscf]) was too low to act as a disincentive (making it more economic to flare than to pay the penalty) and needed to be raised substantially. The annual Oil and Gas Industry Reports published by the Nigeria Extractive Industries Transparency Initiative (NEITI) show that, even at this very low penalty rate, some producers have not paid flaring penalties in full or at all.

In 2016, the government launched the Nigeria Gas Flare Commercialization Program (NGFCP), targeting 2020 as the year by which routine flaring would be ended. This target was not met. In 2018, the government issued the Flare Gas (Prevention of Waste and Pollution) Regulations, 2018, followed by four sets of associated guidelines. An important feature of the 2018 regulations was a marked increase in the flare payment rate. The 2018 regulations also provided a mechanism, similar to the one in Indonesia, for the government to take natural gas that would otherwise be flared and bid it out to third parties to commercialize it.

The Associated Gas Re-injection (Continued Flaring of Gas) Regulations, 1984, set criteria for when flaring is allowed. No evidence of enforcement is available in the sources conducted. The National Effluent Limitation Regulation, 1991, issued by the Federal Environmental Protection Agency, placed limits on the concentrations of hydrocarbons in atmospheric emissions. Section 12.3 of the Flare Gas (Prevention of Waste and Pollution) Regulations, 2018, ban routine flaring for greenfield projects.